Toasty's Grade A+ Mess of characters 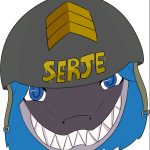 Toasty
Posts: 51
Joined: Tue Oct 10, 2017 1:33 am
[phpBB Debug] PHP Warning: in file [ROOT]/vendor/twig/twig/lib/Twig/Extension/Core.php on line 1266: count(): Parameter must be an array or an object that implements Countable

General appearance: A small but muscular featured woman sporting a half-shaved hairstyle upon her dome. She dons a rather skeletal looking face with a clearly defined jaw and chin, the skin-hugging onto the bone from the use of Chems and other combat enhancing inhalable. Other notable features upon her face would be the smooth nose slightly perked up and dull hazel colored eyes, strained with streaks of red from the use of chems and the addition of a small arrow pointed up, tattooed upon her forehead. The woman's lower half, a brawny frame with a rather noticeable hint of muscle that would be littered with scars and needle marks of past or sometimes present experiences. Most of her body is hidden by the tattered tan trenchcoat and hobbled together armor plating from various sources, she wears a “Borrowed” Armageddon pattern Gas mask modified with her own personal touches, with tubes splitting up into fours that snake around both her shoulders and into a large intake canister upon her back, a second hole poorly constructed with a rusty fitting would be on the bottom nearest her chin, obviously a place for her chems to intake.

Background: A street orphan at the age of 5 and a full-blown Hive Gang member at 12, Moto has made quite the stir in her past when it came to thievery and cunning, but following a silly made up doctrine she refused to kill, a trait lost to her during her later years. Moto belonged to the Ratlings, an underhive gang where her thieving skills were put to use, but more involved brute force and the often rival gang clashes. Either way, Moto excelled at her work and made quite the collection of friends, slowly getting the hang of things until it all came crashing down on her 17th birthday. The mission was supposed to be easy get into a nobleman's house, steal his precious shinies and get out easy job! Moto didn’t even have to worry about anything, little did she know, she was about to pay for her arrogance The whole house was a trap, someone wanted Moto gone and that happened. Within ten minutes of breaking in, the Arbites had kicked down the door and beaten the woman into submission, an unjust fate for but a break in, but there was more to it than that. Someone had fibbed the records, making her out to be a murderous psychotic, a task in which the Arbites knew to handle. They made quick work of her on the hive world, shipping her in cuffs to the mining colony of Savlar where her and other convicts toiled away at nothing but bare scraps of ore. Moto lasted for 7 years, 7 years of constant beatings, hard labor with no pay or breaks, and shut in with killers who’ve done far worse than her Robinhood like endeavor. Eventually, enough was enough, something happened that fateful day causing Moto to snap maybe it as the fumes in the air or maybe it was a loose comment, either way, she grabbed a nearby miner and brutally bludgeoning him to death with his own tools. Before she could get her hands on anybody else or vice versa, the Arbites were already on her, knocking her out and dragging her away. Once coming to she was face to face with a rather menacing Arbite, impressed by her record the man gave her a choice, continue to toil in the mines with the possibility of execution for her infraction, or join the infamous Chem Dogs and fight till she dropped. Needless to say she jumped at the shot for a chance out of this planet. Over the next two years, the woman was reformed into one of the many feared chem dogs, using her old thief tricks to steal goodies from her fellow Dogs with the added bonus of looting the approved enemy of their precious items.

Personality: Despite the backstory, Moto is truly easy going, sociable and friendly though usually with a wash of cockiness. Though when her drugs kick in she can just as easily be a cold-blooded savage warrior in the so-called name of the emperor. Due to the mixture of drugs and her experience at the mining camps, Moto has developed quite the temper when pushed too far, causing quite the predicament to her and those around her.

Friends: Mostly anyone under the banner of the Imperium, fellow Chem Dogs, and anyone dumb enough to not look after their stuff.

Enemies: Commissars, Anyone with a high rank above Sergeant, Adeptus Arbites,

- Tan colored Trench coat decorated in the uniform of a Savlar Chem Dog, dirtied and riddled with holes to expose the pale flesh and with a sleeveless undershirt beneath it.

- “Borrowed” Munitorum-Combat boots, suspiciously the same color of a Tallarns.

- Poorly Refurbished Flak pads, with other bits of metals and materials from enemies and scrap lying about, poorly welded or beaten into its shell.

- Large air canister fitted upon back, with tubes splitting up into fours towards the mask on the wearer

- Worn Satchel bag with loose patchwork to cover up its many holes.

[ My first character! Please leave questions concerns or anything I need to change in the comments! I tried my best to make this, but I imagine I've got something wrong so please tell me! If you're wondering why this Format is similar to someone else its because I "Borrowed" Clearly's! Me and him are friends so this makes it sort of okay! I hope.. ]
[phpBB Debug] PHP Warning: in file [ROOT]/vendor/twig/twig/lib/Twig/Extension/Core.php on line 1266: count(): Parameter must be an array or an object that implements Countable

Users browsing this forum: No registered users and 2 guests